So far, all of my children have been born in the 20’s of their respective months.

Simon, the 27th of November

Adelaide (Della), the 21st of November

Evangeline (Evy) and Magnolia (Nola), the 24th of September

Different years, of course, but all within six days of each other in terms of calendar dates, a fact of which both my friend Mandy and my husband reminded me when I was getting antsy for the twins to come, and it wasn’t even the 20th yet.

Of course, it’s nothing quite so unusual as my friend, Kyla, who is a fellow twin mom and has had all three of her births on the 11th of various months (I can’t remember the exact time, but I know that both of her twins were born after 11 PM on the 11th of their month, so she cut that one pretty darn close).

You might have noticed that Simon and Della have birthdays within a week of each other in November.

And if you’re really sharp, you might have further noticed that Simon has the misfortune of having a birthday very close to when Thanksgiving usually comes around.

In fact, his first birthday coincided with Thanksgiving, so, of course, I made him a turkey cake: 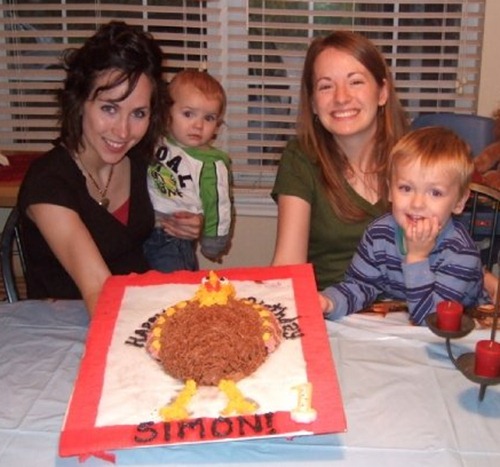 Here I am with my friend, Jerica, and my two little cutie-pie boys (I can’t believe how long ago this seems; they’re so tiny!).

The Thanksgiving proximity means that Simon has never had a real birthday party.

We always make him cupcakes or some such gooey treat and sing happy birthday while we’re at a relative’s house, but as far as a proper party dedicated to  Simon with friends over and the whole works…never.

But this year he’s turning 5, so we’re going to try to do it up right. He’ll still have to share a little since we’re combining Adelaide’s 2nd birthday with his, but he’s the focus.

The theme is Pirates and Princesses, and I wanted to combine the two on their invitation, but it was too complicated (for my amateur invitation making skills anyway), so I just went with one and came up with this: 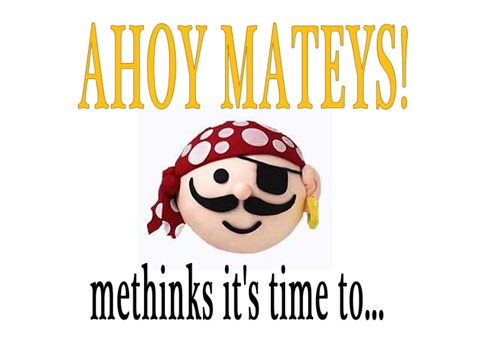 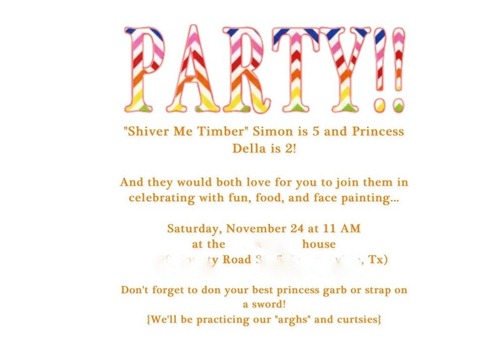 I’m brainstorming all of kinds of theme-y things to do to  make it fun, but I’ll be honest, a lot of them may not get done.

I’m determined to at least have the cake made by the time the guests arrive (which is better than I managed for Adelaide’s first birthday party), but other than that, we’ll just be celebrating the cutest little dimpled 5-year-old ever (and his equally dimpled and cute little sister, of course).

And that’s what I’ve been up to.

What about you guys?