Hope your Saturday morning has been chock-full of cartoons, French toast and maple syrup, and snuggles with your loved ones (because that’s what everybody’s Saturday mornings look like these days, right?).

But just in case there haven’t been quite as many rainbows and Lucky Charms as you’d like in your morning (or even if there have), I’ve got a huge treat for you!

I asked my good friend, Angela—mama to 6 and funny-woman extraordinaire—to stop by and share a few words of wisdom and humor with you this morning from her vast storehouses of her child-rearing experience. 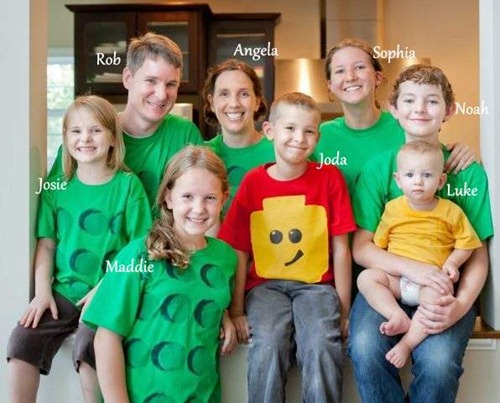 Angela is, hands-down, one of my favorite people on God’s green earth—for many reasons—not the least of which is that she manages to stay so very chill and gracious no matter what her circumstances, and it so inspires me to (at least try) to do the same.

I know you’ll love her too if I’ll just stop blathering and get out of the way, so that’s what I’ll do.

Hi there.  My name is Angela.  I’m so happy to have a minute to sit down and giggle with you some today!  I feel like we must already be pretty kindred spirits, as much as we all enjoy Five Days…5 Ways!  So grab a cup of coffee and let’s get started 🙂

You know the signs that are so popular right now:  “Keep Calm and Carry On?”

I’m never really sure if that is to honor or poke fun at the British.  Kind of like I’m never quite sure when folks ask me how I am so calm with such a big family if they are giving me kudos or ribbing me a bit.  I usually choose to laugh some myself because my family—consisting of my husband, me, and our six kiddos—isn’t really all that big by BIG family standards.  Plus, I’m not sure that my kids would classify me as ‘calm’ on an hourly basis.

Still, in light of the question and the many times I’ve heard it, I decided to think through just why and how I am who I am.  Or something as close to an answer as I can get, anyway.  And I’ve pulled out three things from my list to share with you today.

Develop {and keep} a sense of humor

I love the early joke telling stage all of my kids have gone through.  This was one of my favorites.

What does that have to do with anything?  People you can joke around with are way more fun to spend time with.  Laughing is also good for your spirits and a pretty good calorie burner.  Maybe we could convince Abbie to let us just tell jokes one Move-it Monday?

Know there will be craziness.  Plan appropriately.

Just this week I was pretty jazzed because I had time—real time—to flip a load of laundry (side note: laundry = an island of crazy unto itself) before I needed to leave the house for an appointment.  Not only did I have time, but my not quite 2 year-old, Luke, was happily entertaining himself in the next room.

One load down, and feeling quite accomplished, I walked into the kitchen to discover a Winter Wonderland.  Luke is apparently getting stronger and was able to access the baking powder kept inside the refrigerator door and keep himself superbly entertained for some time. 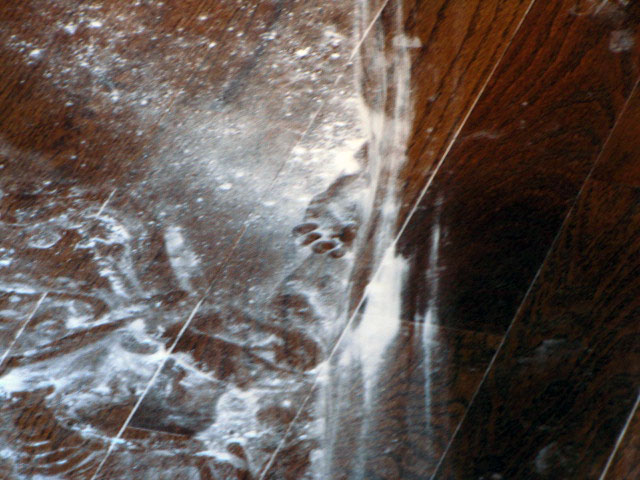 Whoosh.  The ‘extra’ time I had vanished into thin, white, cloudy air.  Was that his fault?  My fault?  Nope.  Just craziness.

Later in the day, after picking the big kids up from school, I tarried in the driveway visiting with my daughter while the rest of the kids headed into the house.  When I reached the kitchen a few minutes later, I realized that Luke must also have grown taller because he had managed to reach the container of margarine that had been sitting out on the counter all day and decided to remove the lid for closer inspection.

I was stuck in a slow motion movie sequence as I watched him continue the tactile experimentation by putting his entire hand into the soft, gooshy butter, grabbing a fistful and laughing manically as his margarine pitch splattered across the kitchen.

Was that his fault?  No, not as a one-year-old.

Mine? Well, a case could surely be made for that as he did beat me into the house and I apparently hadn’t put the tub into the fridge before leaving the house post Santaland that morning.

But, still, it basically amounts to craziness.  It happens on every level of parenting and most frequently means an interruption (sometimes minor, sometimes major) of your schedule.

Don’t let crazy times change your mood.  The next time it shows up at your door, take a deep breath and smile at the crazy.

Be ready.  It will freak everyone around you out!

(And I’m not just reminding (myself) you of this because my oldest will be leaving for college next fall.)

There are so many moments to love.  Snuggles.  First Steps. Teeth tucked under pillows. First bike rides.

But I mean really love the moments.  Even those that might not feel so loveable at the time.

I was a pretty overconfident mama when potty training came around.  My first daughter was an expert by 18 months.

And then I had boys.

Now your boys might be different, but mine didn’t care.  I had to work like the Dickens to get them to make any effort that direction.  By the time they hit three I could usually find a way to make it worth their while.  And it inevitably involved candy.

One evening our family went to Dairy Queen (because they had the best playland).  The kids were so excited that we didn’t have the heart to abandon ship when we saw that it was jam-packed full of  people.  (We’re still wondering what the DQ convention was about, in fact.)

We were lucky enough to find a table right by the playland exit, which thrilled me  because my little guy was a bit of a wild card, and I wanted to keep a sharp eye on him.  The kids played, we ordered.  Before long, a pastor from our new church came through the door and, spotting us, asked if he and his adorable daughters could join us.  We were glad to have the chance to get to know him, as we had just moved into town not long before.

We were deep in conversation when my mommy ears picked up over the din of the packed restaurant a delighted shout: “Mommy!  I went pee-pee in the potty!”  This was repeated over and over as the voice grew closer to our table.

Of course I knew it was the voice of my son, and after the shock of discovering he had managed to slip right by me from the playplace, my mind went directly to what an awful mother I was.  He could’ve been kidnapped or worse and—ew!—I’ve been in those bathrooms, and they are not sparkly.  What on earth must he have touched in there?  During the split second it took to run through those thoughts in my mind, I was scanning the packed house for any sign of the boy.

And in those hands he was holding aloft…his shorts and underwear.

“The next time {crazy}shows up at your door, take a deep breath and smile at it.

Be ready. It will freak everyone around you out!”

I love this. (and need to remember it…probably 5 minutes from now)

Thanks, Ange, for taking the time out of your incredibly busy schedule to stop by and make us laugh (and think). I hope Luke managed to stay out of mischief long enough for you to write all this down!

So…what about you guys?

What are some of your favorite “moments” that you love and can (hopefully) look back on with a smile now?