Apparently, East Texas had an earthquake in the middle of the night…and I never felt a thing.

It was a 4.3-er, and I still just slept like a baby (side note: there’s a great movie line about that phrase, where one character asks another how he slept, and he—a big, burly dude—answers: “Like a baby. Woke up every two hours and cried.” : )).

No injuries or major damage were reported, but between the Dallas tornadoes of last month and now this, it’s starting to feel like the apocalypse is nigh.

Anyhoo, in other news, this was probably my favorite Thrifted or Grifted yet!

You guys were so conflicted, and the voting was SOOOOOOO close that it made for quite an entertaining little saga playing out (okay, saga’s probably too strong a word…bear with me here…we had an earthquake).

(About Thrifted or Grifted, I mean. I am not referring to the “is this chick trippin’?” dialogue that’s running through your mind right now). 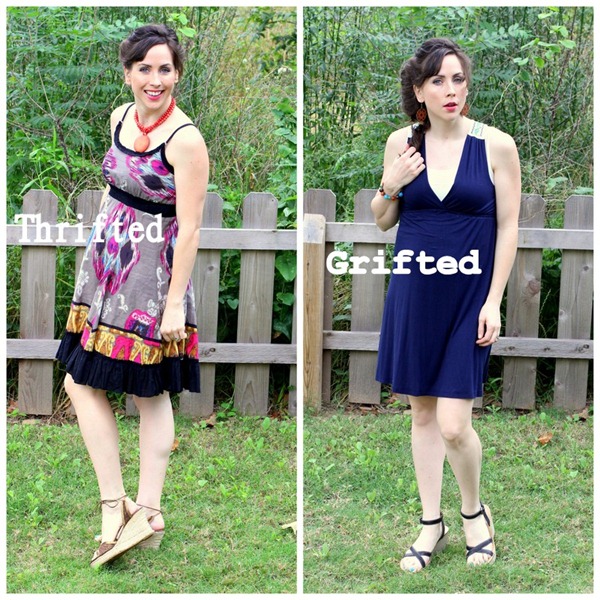 …and 52% of you were aaaaaalmost right.

In addition to being one of the closest-to-call T+G’s on record, it was also one of the closest in terms of $$, mostly because I bought my “owl dress” (which I can now longer think of as anything else) at a new local thrift/consignment store called Plato’s Closet.

But they only carry of-the-moment looks, and the store is well-organized and clean—with an especially promising and and reasonably priced shoe section—so I’ll definitely be going back.

Oh, and my favorite commenter from this week was a no-brainer.

“I’ve said it before, and I’ll say it again- this game is so fun!!
I think A is thrifted because that navy dress is too blue to be worn in…
unless of course it was thrifted brand new-ish…
then B would be thrifted, because A is not {then the poison would be in my own glass, unless of course you used reverse psychology, then you would have put it in my glass…Princess Bride, anyone?}
Love your hair cute preggers lady!”

She compliments my hair and my goofy fashion game AND she references the Princess Bride all in one fell swoop?

That’s an automatic win in my book.

(Plus her blog rocks!)

P.S. I’ve been trying to think of a way to word this without sounding desperate for compliments but can’t, so I guess I’ll just say it, and you can take it how you like:

Thank you all so much for your kind words on my pregnancy Wardrobe Wednesday posts.

In “real life,” I can’t tell you how many times I’ve heard someone say: “Whoa! You’re practically as big now as you were when you had Della!!!”  in the last several weeks.

(I mean, really, was that “whoa!” absolutely necessary? Much better to go the Mandy route and exclaim, “Twins?? But you’re so tiny!” Now, that’s a good woman, there).

Please believe me when I say that I’m not hoping that you will leave me a flood of compliments today assuring me of my tininess.

I  can promise you that other people aren’t the only ones who have noticed the difference in “the belly” (it’s twins, for crying out loud), and I am under no delusions that I will (or should be) getting called small by anybody in the next several months, but it is nice to have the perspective of folks who have never seen me pregnant before to help when my whiny, “I’m HUGE!” pregnant alter ego tries to take over the rational being that is buried somewhere under all the hormones.

A while back, the Nester did a post on pet peeves and got about 5,467 responses (okay, actually 324, but who’s counting?) to her request that her readers share their own “drive-me-crazies.”

Well, because she’s the Nester (duh) and because we humans sure do like to vent.

Now, I’m not saying that her post was a bad idea…at all.

In fact, the responses were by turns hilarious, insightful, and quite telling…

But it got me thinking about what the opposite of pet peeves might be?

If x, y, and z are the things that totally make my skin crawl, what are the a,b, and c that make me do happy dances every time they occur?

For me, the short answer is unexpected blessings.

Sure, I like spectacular sunsets, double rainbows, random flowers from my husband, and snuggles from my babies,

What I mean are the small, fun moments in life when you just can’t help but grin and said, “Thanks for that, Lord.”

So, here are 5 things that are on my list of what I’m calling “Pet Loves,” in no particular order:

Being in a hurry and having dreaded thoughts like, “Oh shoot, I forgot to put the clothes in the dryer, so my exercise shorts aren’t ready,” or, “Oh shoot, I bet the boys didn’t put their shoes back, and now we’re going to spend 10 minutes we don’t have looking for Simon’s flip-flop,” or, “Oh, shoot, I need that gift card, but I don’t remember putting it my purse, and now I don’t have a clue where it is”…only to discover that, either angels have been at work, or I actually did remember to do all of those things, and I’m not going to be late (or have to succumb to the urge to gnaw my own big toe off) after all.

Discovering $5 in my back pocket, a forgotten balance on a gift card, or a $67 Amazon credit I didn’t even know I had.

This one’s very similar to #2, but there’s not much in the small scheme of life that can beat getting to the register with your items and finding out, “Oh, by the way, everything you’re holding is an extra 50% off today,” or, even better—as happened on my last trip to Hancock’s where I bought the last yard or so of fabric on a bolt—“It’s on the house.”

Looking for bloomers to go under one of Della’s skirts only to remember that she’s wearing a snap onesie, so I don’t need them (am I the only one who has trouble keeping up with all the baby girl paraphernalia? Oh dear. I’m in trouble).

Finally managing to remember what/whom something/someone reminds me of because it’s been bugging me all. day. long.

(Okay, so maybe calling that last one a “blessing” is a bit of a stretch, but it sure does make my brain go, “Aaaaaaah”)..

So, what about you?

Do you have “Pet Loves?”