You guys know full well how cheap I am.

If you hadn’t already figured it out from the ridiculously low outfit totals from my Goodwill buys or from the fact that I will agonize over spending a few dollars more on one brand of nails over another or that I tend to craft out of a “necessity” to get something I Iike for way less…then you could just go with my constant assurances that I am, indeed, quite frugal, since I freely and frequently admit it.

And yet, there are times, when I will purposely turn a blind eye to a price-tag (all within reason, y’all; I can only restrain my inner frugalista for so long) if I have a specific goal to accomplish or feel like I can get a lot of longevity out of a purchase.

Such was the case with several items for last Friday’s dinner party—even though I would love to be able tell you that I pulled the whole thing off, food and all, for less than $100.

Of course, there were plenty of made-over Goodwill junkers mixed in with the new purchases (hello? I’m still me).

So, today I thought I’d show you 5 things I didn’t bother to shop around much for or even try to knock-off AND their cheap-o counterparts in an attempt to demonstrate how I very inexpertly jumble together bought, made, bargain, and retail into one hopefully somewhat cohesive final product.

In the process, you’ll also see a lot more of the party details in pictures since I’ve mostly given you a general overview in Tuesday’s and Wednesday’s posts (a huge thank you to Mandy for grabbing my camera without my even asking and snapping most of these details shots while I took care of the last minute dinner prep, or I’m fairly sure there wouldn’t have even been any pretty before shots to show you). 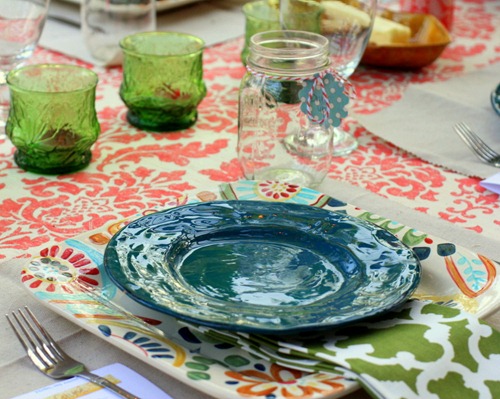 I had high hopes of making my own napkins. In fact, the plan was originally to use a ginormous drop cloth to make the tablecloth and to sew the napkins out of that pretty coral damask fabric you see for the tablecloth.

But when my husband ended up making the table for the party, and I realized what a drag looking at 15-odd feet of oatmeal-colored drop cloth was going to be, I decided to go bold with the tablecloth, leaving the napkins a bit of head-scratcher for me.

It’s not crazy expensive or anything, but since I could have made them for pennies on the dollar, it certainly seemed that way (until I stopped to think about the facts that a) I don’t already own cloth napkins, b) these match my breakfast nook décor perfectly, and c) it would save me oodles in therapy if I would just buy the dang things rather than trying to add one more “make this!!!” to the list).

So! $30 later, I was the proud owner of cloth napkins and dang cute ones too! 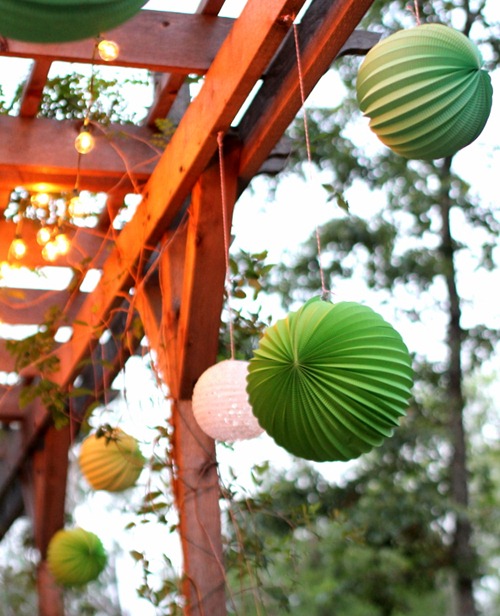 I knew that I couldn’t achieve the “enchanted evening” ambience I was hoping for without the help of “twinkle lights” and colorful paper lanterns.

I found both the green ones and the white eyelet options on Overstock.com, and they were about $26 shipped, which, now that I think about it, is actually a pretty remarkable price when you consider that I got 9 lanterns out of the deal.

I was planning on using both as décor in my kids’ rooms after the party, but the green ones aren’t holding up too well. The white, lacey ones are doing great, though, and are even more gorgeous in person. They’ll be serving as the mobile over the twins’ crib. 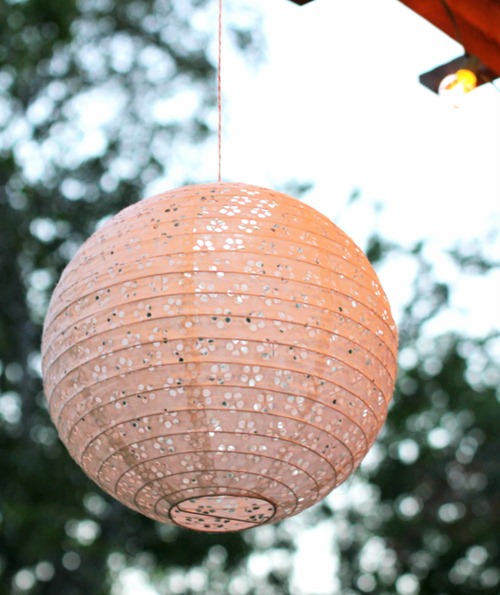 The large bulb patio string lights are available in Target stores for $13 per 20 ft. strand, and we bought 4, which brought our light splurge total to around $80.

The green glass tea light holders + tea lights which came from Goodwill and Ikea respectively and cost a whopping $6 for all 8. 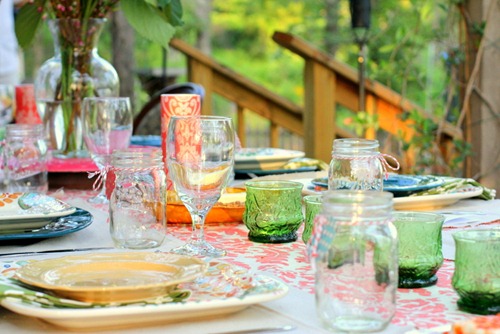 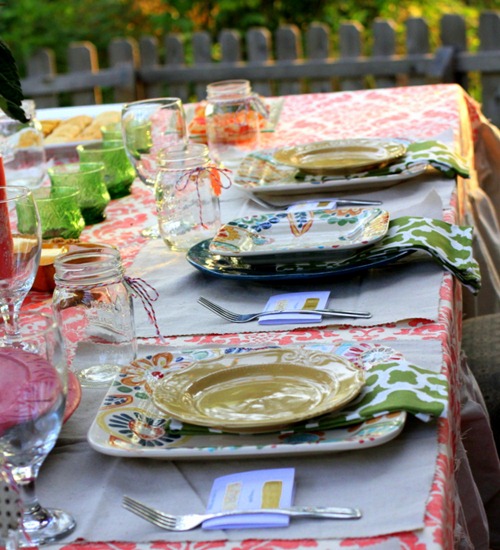 Okay, so the silverware wasn’t exactly a true splurge since it was just a $45 60-piece set from Walmart.

Still, we did already have silverware from several different sets that could have been hodgepodged together to make do for our guests.

But they weren’t quite hodgepodge enough to be “charming,” just mismatched.

So we opted to buy a matching set, instead, and keep it for future use.

(Sheesh. Cloth napkins. Matching silverware. Apparently, this party went a long way toward helping me become a real adult. These weren’t splurges! These were rites of passage!).

Our mason jar “drinking glasses,” which were $8/12 at Walmart. 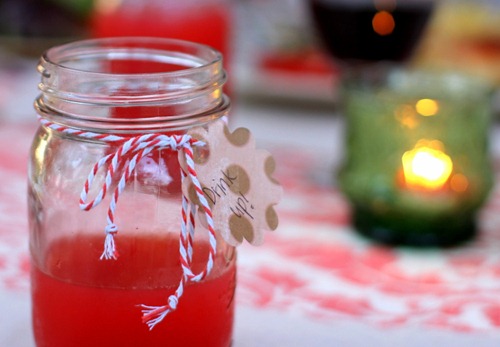 (One of my favorite shots of the night for some reason). 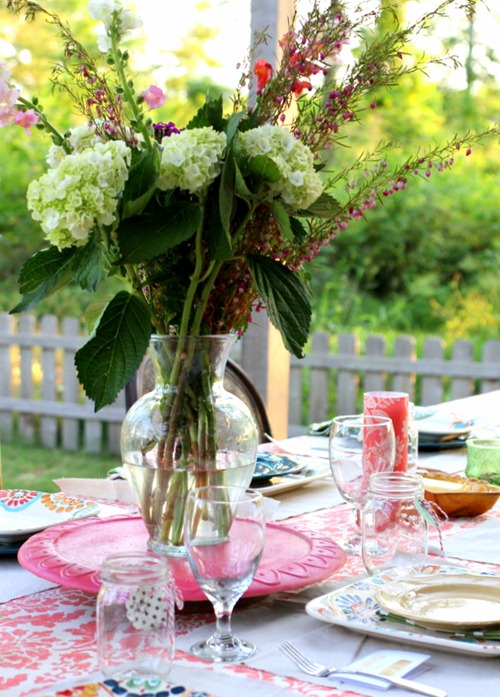 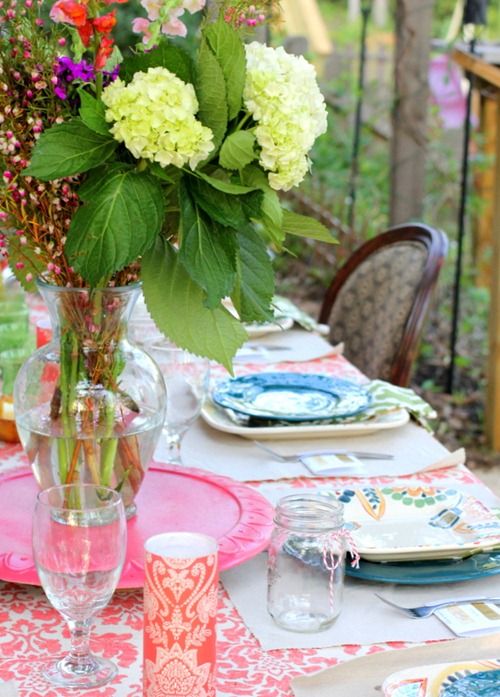 Our fields were bursting with wildflowers, and I was leaning toward gathering bouquets of Black-eyed Susans and Indian Paintbrush until I spotted those clumps of minty hydrangeas at the grocery store (classy, I know), and immediately plunked down $35 for them because I could see in my mind’s eye just how great they would go with the coral in the tablecloth and the more intense green of the tea light holders and lanterns.

I was planning on grouping them in small vases for maximum “spreadage,” but…

At the last second, my awesome friend, Jolinda (from yesterday’s Wardrobe Wednesday post), sent me a text with a picture of buckets of flowers in the perfect color scheme for the party sitting around her ‘kitchen, and it said, “You need some flowers?”

She came early and “threw together” that beautiful arrangements using the hydrangeas I already had and some of her other pretty blooms, and—voila!—at no extra cost to me, my $30 “clumps” morphed into a much more expensive looking centerpiece (Thanks, Jo!). 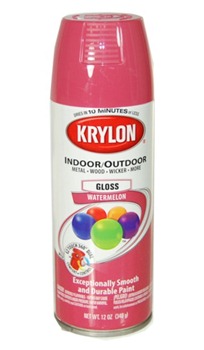 I realize that spray paint could be considered one of the least splurge-y purchases ever, but at $4 a pop, when you buy 15 cans or so and then proceed to use them all, it can add up fast.

Fortunately, one of the main things I spray painted were the $6 benches (for both) that almost got me a hot date with the Goodwill loader who helped me put them in my car.

I couldn’t find a shot that really gave you a good angle on the seating, but you can at least get a glimpse of my watermelon pink benches in this one, and you’ll be seeing more of them very soon. 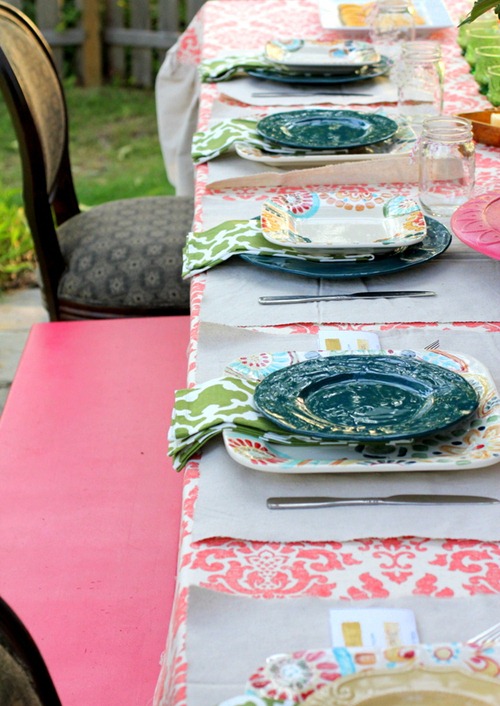 So, there you have it, folks!

A party tour and a completely non-comprehensive cost breakdown of some of the most/least expensive elements of the décor.

To say I’m pleased with how everything came together is quite the understatement.

Especially the color scheme, which just made me happy and came about so organically that it practically chose me!

I bought the fabric for the tablecloth a while back with nothing party-related in mind and only thought of adding in the pops of green once I found the paper lanterns on Overstock.

I had planned on using white Dollar Store dishes but did a serious happy dance in the kitchen when it occurred to me that by mixing and matching all of the various patterns/solids of dishes that I own (most of which are from Goodwill) that I could come up with enough place-settings to go around AND that the colors coordinated pretty much perfectly.

Of course, I couldn’t help but giggle a little bit on a last minute Target run where I found my coral-trimmed bread basket, those tall, coral paper-encased decorative candles, and a plethora of other accessories in apparently trendy shades of either…coral…or spring green.

Obviously, I was quite au currant, and I had no clue.

I think that’s all I’ve got for the moment, but I thought I’d leave you with a few last shots of some of my favorite tidbits…because what party recap around here could be complete without a collage? 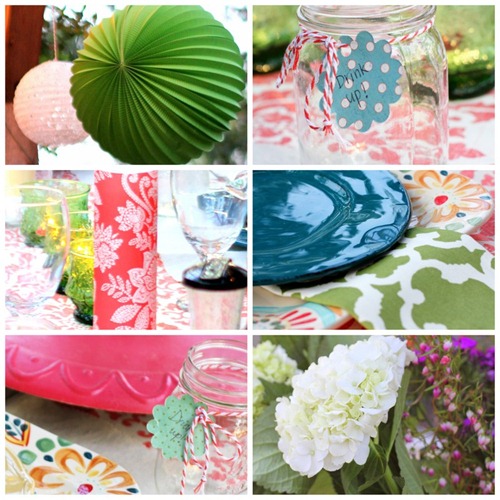 Of course, if you’ve been paying close attention, then you might have noticed one glaring gap in all my party detail recaps.

Say it with me now: THE FOOD!

Which is exactly what I plan to talk about tomorrow for Feature Friday!

Speaking of which, if you’ve got something to show off, Feature Friday FREE-FOR-ALL will be live @ 7AM tomorrow.

Can’t wait to see you there!