69% of you said Exhibit B was thrifted.

Which means that 69% of you were wrong. 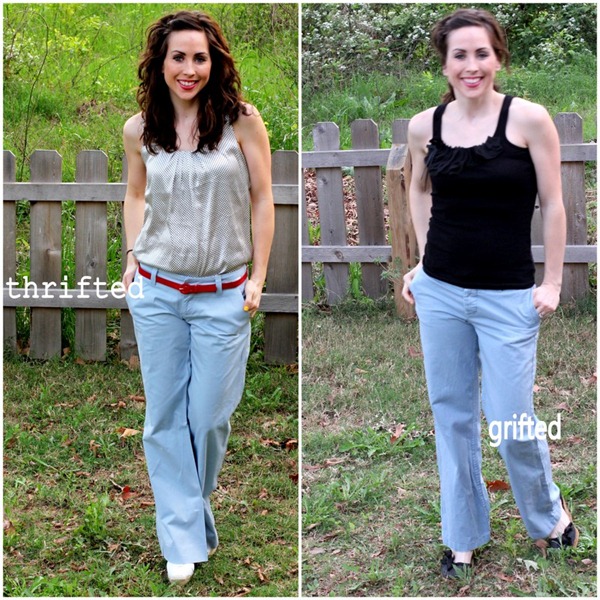 Yup, that’s right. Those pants with the razor sharp creases came fresh (ha!) from Goodwill in just that same condition.

In fact, they were so starched (I could barely get my hands in the pockets) that I wondered if maybe somebody thought they had literally starched the life out of them and threw them in the giveaway pile because there’s sure-as-heck nothing else wrong with ‘em.

Oh, and I sure-as-heck didn’t wash them before I threw them on for that pic.

Say eewwwww all you want…

Those were perfect, starched pants, which will never happen in a house where ironing only gets done on an as-desperately-needed basis.

So, I had to enjoy it while I could.

Oh, and as far as the shoes go, I cheated a little on both, but they balanced out.

They were both gifts—one from a friend who originally got them at Goodwill, and another from another friend who bought them as a b-day gift (while I was with her) forever ago for (clearance) retail (I think they were $15).

(Did I work enough parentheses into that last paraphraph? Hey, just trying to live up to my profile claims).

Both outfits are dirt cheap, but the thrifted version is a) cuter (in my opinion, and you guys seemed to agree) and b) less than half the price of the grifted option (even considering the extra sartorial element…translation: the belt).

Can’t beat that with a stick no matter where you got it or how much you paid for it!

Oh, and as much as I love reading every single one of your comments (and I really do), anyone who takes the time to rhyme her guess gets big-time brownie points in my book.

So, this week’s 5 free entries into our upcoming giveaway (and by “upcoming,” I mean this Friday) go to Gwen, who said:

“Yo. I don’t know.
I’ve got no thrifted mojo…
I’m just guessin’
that B your dressin’
is the Thrifted lesson
cuz the pant’s need pressin’…

Oh, don’t hate me!!! It just was the only thing I could think of that rhymed!!! And, don’t look at my wardrobe, cuz everything needs to meet an iron…gah!

They are both super cute…no matter where you found them! Love this post, girl!”

And I love your mad rapping skillz, girl!

Stay tuned for 5 Things Thursday because “after these messages, we’ll be riiiiiight back.”

(Please tell me you remember that. Man, I miss Saturday morning cartoons).

(Good grief  that was a lot of parentheses!)