I like to cook.  And I’m not too bad at it, either (if the fact that both my boys have said on more than one occasion: “Mama, you’re a good cooker,” is any indication. Which…what other indication could there be?).

But I can’t lay claim to the recipe for most things that I make, which means that, if they turn out well, I can’t really take any credit for it.  I just copied someone else’s idea or followed a recipe or—very rarely—dumped something out of a box.

But my spaghetti sauce is all mine, a spin-off of the recipe my mom used to make for us and which my grandmother made for her when she was young.  And that makes my chest puff out just a little with cooking pride.

Today, we’re making the sauce and then layering it with noodles and cheesy goodness to create a yummy lasagna dish, but you could just dump some spaghetti or angel hair in once you’re done, and you would have my spaghetti recipe as well (Dang. I was going to try to get two posts out of this).

So, really.  Today’s a two-for-one kind of recipe.

Here’s what you’ll need to get started: 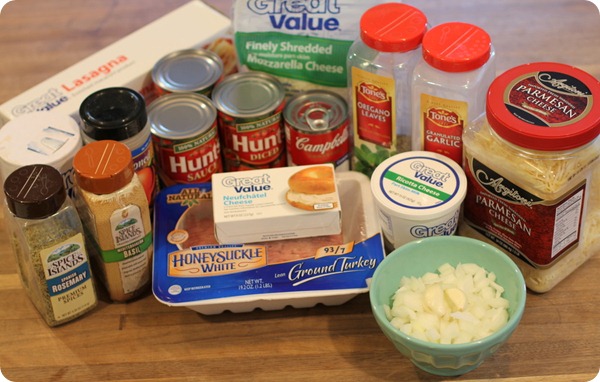 1. Sauté the diced onion in your 1/2 tbsp of olive oil in a large stock pot (I do everything in the same pot to avoid unnecessary dishes) over medium heat for about three minutes or until the onions starts to turn translucent. 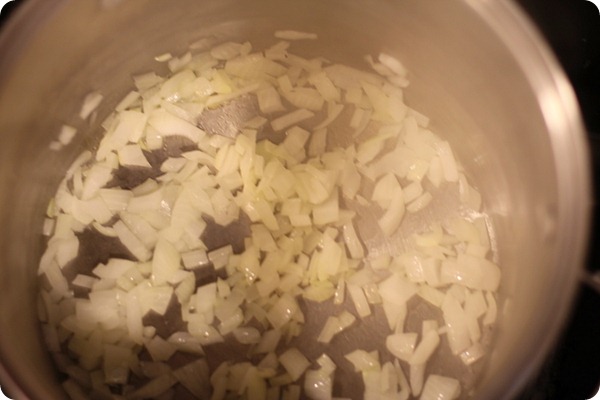 2. Mince your garlic, and add it to your onions. Continue cooking another 2-3 minutes. 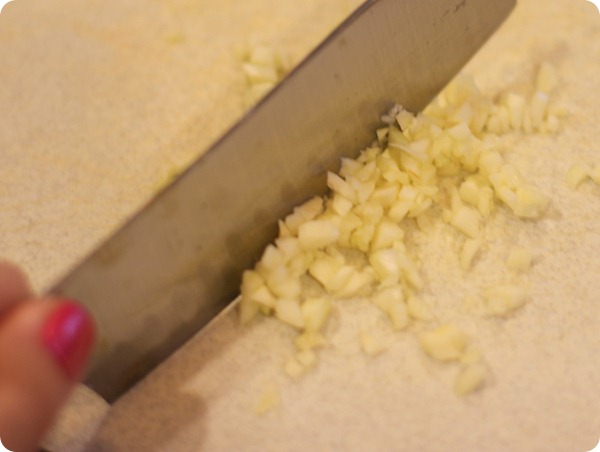 3. Add your ground turkey and cook for 1-2 minutes, breaking it up continually with your spatula (because of turkey’s low fat content, it will clump, not crumble).

4. Measure out all of your seasonings in a bowl, mix together, then sprinkle HALF over the meat/onions/garlic mixture. Continue cooking for another 4-5 minutes.  *Note: the meat will not brown visibly or turn super-yummy looking. In fact, the less fat your meat has, the grayer it will appear.  Don’t let that fool you, though. In cooking as in life, sometimes it’s the least attractive little guys that taste the best (hmmm…that did not translate well from my brain to the screen. Can someone please pass me the fava beans?). 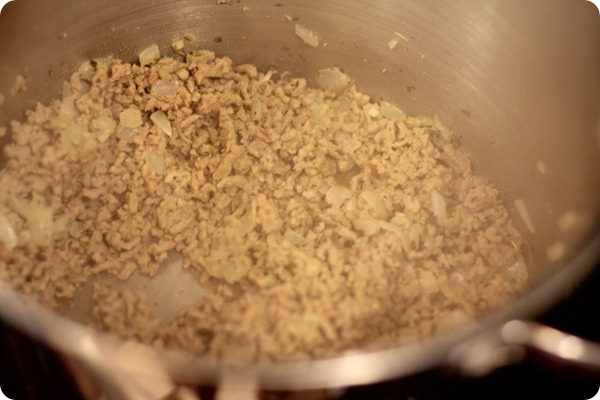 And no, my pic is not just blurry in weird places. That’s all the pesky steam getting in the way.

5. Dump your three cans of tomato sauce/diced tomatoes into your meat mixture, then add the other half of your seasonings. 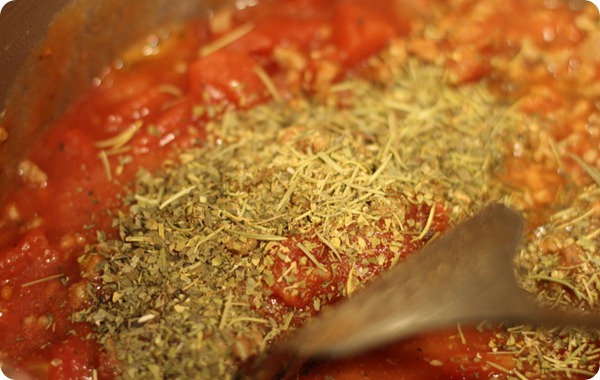 Now we’re starting to pretty up!

6. Once you’ve swished your seasonings and sauce together, add your can of cream of mushroom soup.  This may sound like a strange addition to spaghetti sauce, but I assure you that it adds the most wonderful earthy hint of creaminess.  You might end up writing me thank-you notes for this tip. Your sauce will look something like this: 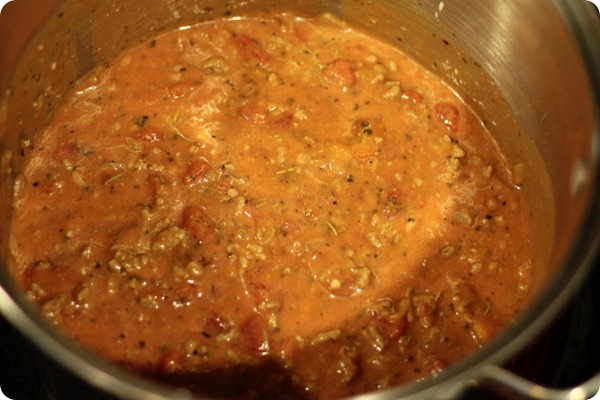 I just finished breakfast, and now my stomach is rumbling again. The things I do for you guys.

7.  Let your sauce simmer on the stove for at least one hour. Honestly, the longer it bubbles, the better it tastes. I’ve let my sauce sit on the stove pretty much all day before (I just cover it after the first hour except for one little slit to let the steam out), and just about passed out from sheer bliss when I taste-tested the first spoonful.

8. Fill a large pot with water, bring to a boil, then cook your entire box of lasagna noodles according to the package directions.

9. Once your sauce is sufficiently yummified, preheat your oven to 375.

10. Grab a 13X9 (or larger…you’ll probably run out of room with the 13X9) pan (I used this aluminum option from Sam’s because I already had it in my pantry and because I get an insane amount of enjoyment in crumpling it up and throwing it away instead of engaging in an epic battle of the wills with cooked-on mozzarella).

11.  Spread a thin layer of your sauce in the bottom of the pan, like so: 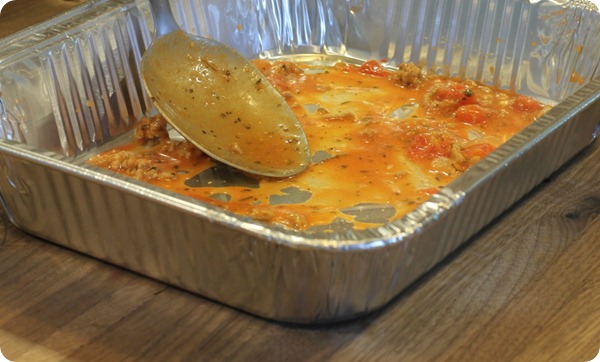 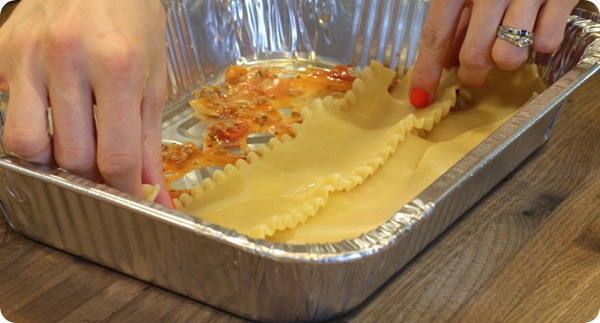 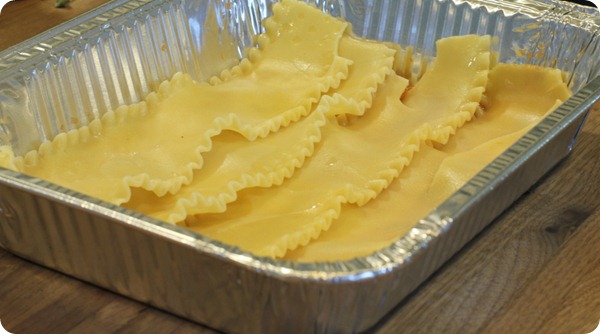 13. Dump your ricotta and (softened) cream cheese into a bowl, grab a fork, and take out any frustrations you might be experiencing on them.  They won’t mind. I promise. 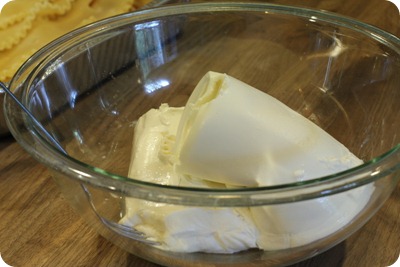 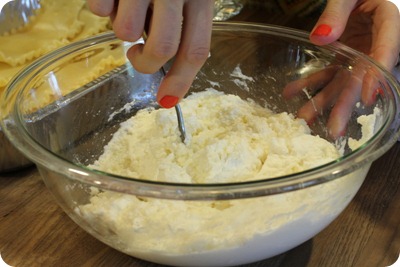 Just the simple act of beating the tar out of combining these ingredients probably saved me thousands in therapy bills. True story.

14. Spread a thin layer of your cheese mixture over your noodles (and don’t be surprised if you regain at least 1/2 of that stress you just released fighting to keep the noodles from globbing together with the cheese and shifting all around your pan. Grrr…) 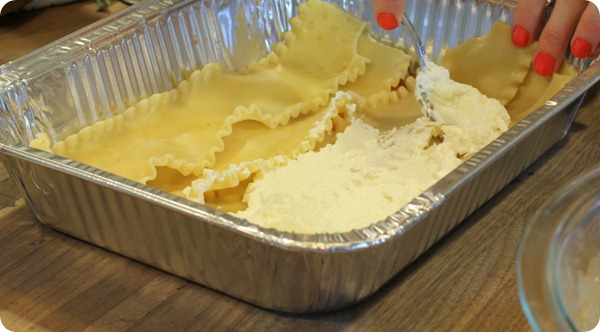 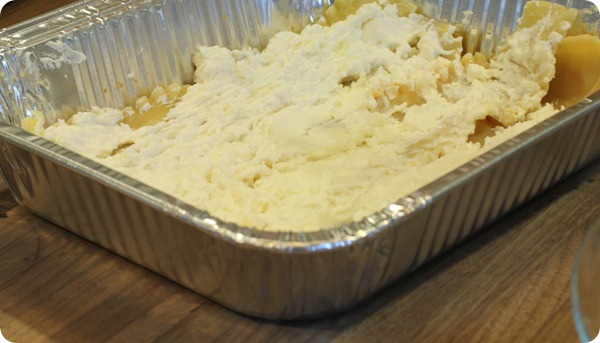 It may not be pretty, but I won. I won, I won, I won! (*Completes victory lap around kitchen talking smack to defeated cream cheese mixture until she notices her children—whom she has instructed to never gloat—staring…and freezes mid fist-pump. Might need that therapy after all*). 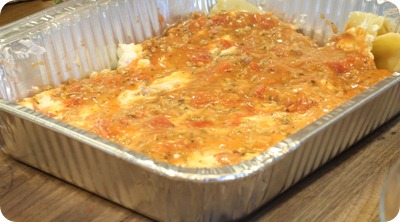 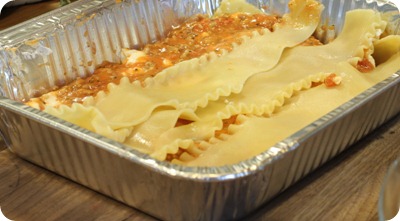 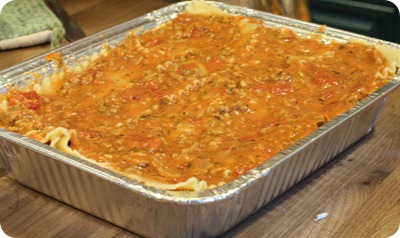 16. Finish with a layer of sauce, then sprinkle on your mozzarella… 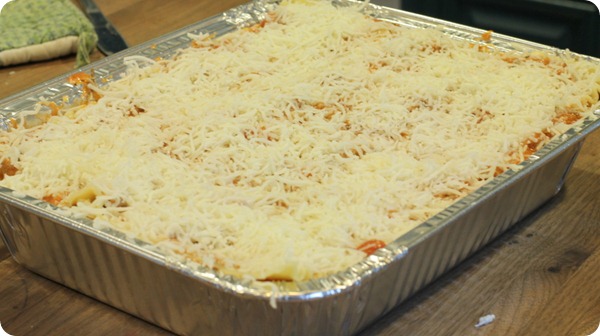 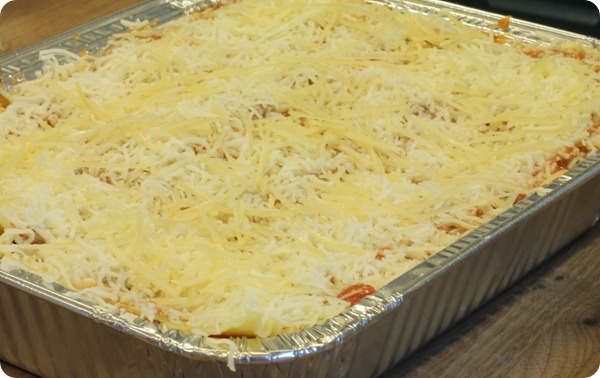 17. Cover with aluminum foil and shove the whole thing in the oven on the middle rack. Cook for 35 minutes @ 375. After 35 minutes, up your temp to 400, move your pan to the top rack, and remove the foil.  Continue cooking 15-20 more minutes (until the cheese turns that lovely golden brown color that makes you want to dive in and eat it with your hands straight out of the oven…3rd degree burns be darned). 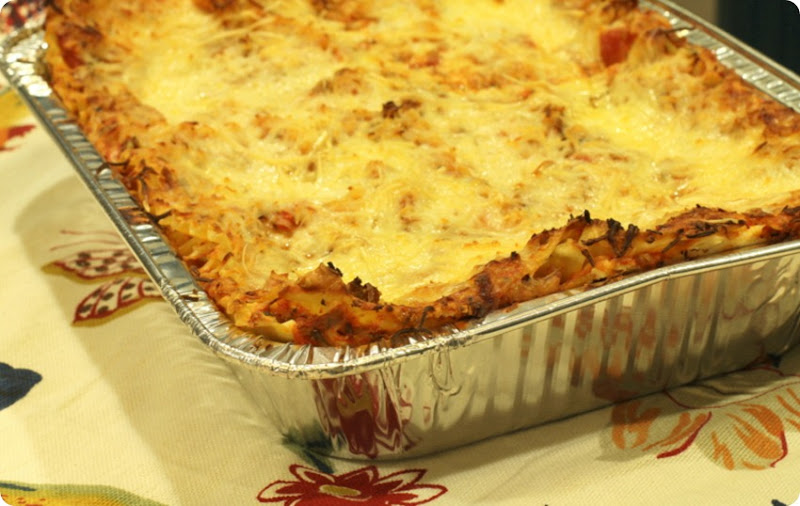 18. Take it out and (after allowing it to sufficiently cool…hey! Just trying to avoid lawsuits…you have heard about McDonald’s and the hot coffee suits, right?) feed it to your family.  Yes, the same family who almost lost heart when you told them you were making a 18-step dish from that nutty blog chick.

19. Bask in the sounds of smacking lips and mumbled, “Dis is dood, Mama!”

And you wanna know something else great? Because of all the healthy-ish options we used, you can get 10 nice-sized portions at only around 460 calories a pop…which is pretty incredible when you consider that there are 4 different kinds of cheese working their creamy, tasty magic on your tongue.  Skip the bread and add a heaping portion of salad with low-fat dressing, and you’ve got yourself a very filling/satisfying meal for about 500 calories.

And because I cannot bring myself to write even one more word about lasagna, I’ll show you this to finish: 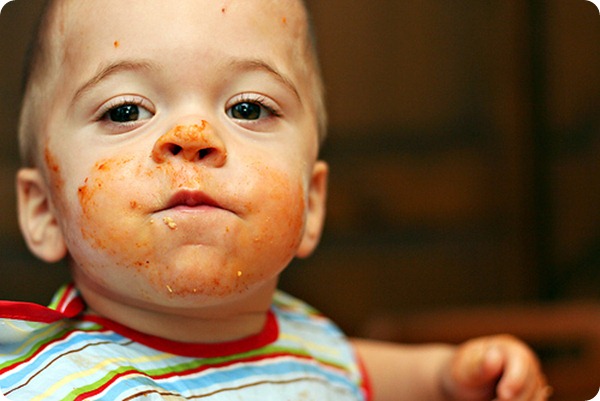 Confession #1: That is not my child.

Confession #2: I don’t know that child at all (but I did make sure this pic could be reused as long as I sourced it).

Confession #3: I intended to show you a picture of my actual offspring chowing down on my lasagna, but we didn’t eat it until 9 p.m. after getting back from teaching class at the gym, and all I could think was: “Get munchkins in bed now.” (My arms might have been extended, zombie-style while I thought this).

…besides, this lil’ dude is pretty cute, don’t you think?

Whacky side note—when I searched for “boys eating lasagna” in Google images, it came up with this: 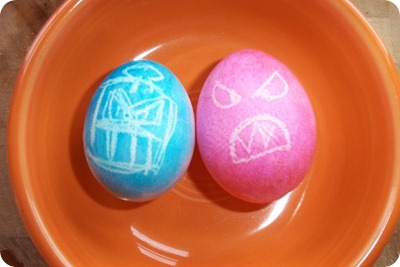 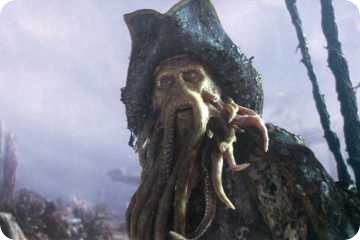 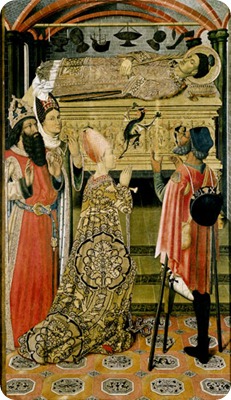 Say it with me, folks…HUH?!

See you tomorrow for Wardrobe Wednesday! I’ve got something fun planned!