MOVE-IT MONDAY: Most people need a kick in the pants to get going on Monday morning, so consider Move-it Monday my cyber-boot firmly planted on your real-live tushy. It’s a chance for me to employ some of the knowledge I’ve gained from my experience as a group fitness instructor and will cover a wide topical range: Cute new yoga gear (yay!). The best way to make tricep push-ups burn even more (boo! hiss!).  Why Zumba will never burn up 1,100 calories in one 55 minute class, no matter what that cool new fitness watch from Walmart says to the contrary (*sigh*).

Now, I know that the #1 fitness goal of practically every woman in America is to lose…something. That last five pounds of baby weight. The extra inches off your waist. The jiggle under your arms when you practice your Miss America wave in the mirror (what, no one else does that?).

The #2 goal is probably to tone muscle since smooth, sleek arms and legs tend to look more appealing (not to mention being stronger/more useful) than the flabby alternative. 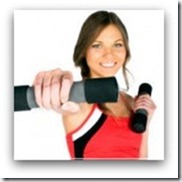 But here’s the kicker: it’s almost impossible to achieve either goal without exercise (insert collective groan of disappointment; you thought this blog was actually going to be worth something and introduce you to the long awaited sit-on-the-couch-watching-reruns-of-Psych-eating-Rocky-Road-and-still-lost-weight diet, didn’t you?)

Now that I’ve reiterated that whole, “exercise is the key,” principle that you’ve already had preached at you from every grocery store aisle pulpit in the nation, I’m going to take my Captain Obvious routine a bit further, and say this:

If you’re going to exercise, make sure it’s something you love, or you won’t do it.

No, but really, in my four years as an fitness instructor, I’ve witnessed the death of many a New Year’s Resolution because an exercise novice jumps feet-first into a P90-X marathon, only to discover that its frenetic pace is a tad much. And then there’s the chick who almost breaks her leg on the treadmill when she starts nodding off from boredom. And did I mention the girl wandering around the weight room in despair because someone told her that weight-lifting gives you pretty arms, but all she can think is, “Dumb-bell is right. This is so stupid!”

You get the idea. So without further blabbering  ado, I present you with a completely-non-comprehensive-and-utterly-unsponsored list of my take on some of the major personalities that I’ve encountered at the gym, and what I think will best suit their fitness needs (these are all group fitness suggestions since I find that those who prefer to exercise alone usually don’t have as much trouble motivating themselves to do it):

1) You hate exercise in any form (you think), but you can’t curl your hair in the morning without music on in the background, and you have trouble not burning your ears because your feet, they like to samba: ZUMBA is right up your alley! A fun, low-impact dance aerobic class set to Latin rhythms, it won’t burn a ton of calories (about 200-300 an hour if you’re really moving, depending on your weight) or get you ripped, but it’ll get your heart pumping and put a smile on your face. (Other options: Hip-Hop Hustle, swing-dancing classes, or old-school step classes like Body Step, which tend to incorporate moves like mambo and cha-cha)

2) You like to bike: a cycling class is what you need.  The pounding bass beat and the drill sergeant instructor screaming, “Climb, climb, CLIMB!” will get you much better/faster results than a leisurely turn around the neighborhood. Plus, you can burn upwards of 400 cals/hr without ever touching the ground!

3) You’re not interested in shaking anything, and the mere thought of treadmills, elliptical machines, and cycling classes makes your feet ache: strength and toning classes could be the answer.  I teach a class called Body Pump, which has great music and focuses on lots (the average track lasts 4 minutes) of reps to tone and strengthen every major muscle group.  It’s also a great cardio workout and burns an average of 300 calories an hour (more or less, depending on your body weight and your weight selection).

4) You’re all about keeping your blood pressure low and your attitude chill: yep, you guessed it – Yoga and Pilates are what you you need.  A Power Pilates class can burn as much as 300 calories (though most will be closer to 200), and will help shape beautiful shoulders, abs, and glutes.

5) Gyms give you the heebie-jeebies: join a sports team! Indoor soccer is a killer workout, with almost constant movement, and even softball can burn around 400 cals an hour for a 150-lb. woman.

6) You don’t like working out in any form, unless it’s exercising your gums and tongue.  Fair enough, but do your feet still work?: find a walking partner and hoof it around your local high-school track or neighborhood park—all while chatting it up.  Even better if you’re pushing a stroller (bonus points for twins!).

7) You like to sweat and don’t feel like you’ve actually gotten a workout unless you’re wrecked when you’re done: high-impact cardio like Body Attack or even a good, old-fashioned tire-toting bootcamp class will do the trick, leaving you pouring sweat and riding that endorphin high until bedtime.

8) You like to hit things but prefer that they not hit back or cry when you do: BODY COMBAT it is!!!! (Okay, really any kickboxing/martial arts class will do, but I’m partial to Combat b/c I teach it).

I’m sure there are many other categories that I’ve overlooked, but what’s most important is to ask yourself, “Self, what do you love to do?,” and then try to determine if there’s a way you could turn that into a workout for at least 30 minutes, 3-4 days a week.  You’ll be amazed at the difference in your attitude, your energy levels, and, of course, your physique!

P.S. If you’ve been wondering where I fall in this spectrum, I’m a combo of #’s 3 (minus the lack of interest in movement), 7, and—above all—8! And, yes, I know that puts me in the kind-of-nuts-for-exercise category, but that’s also part of the reason why I’m a fitness instructor.  I’ve included a brief video of some Body Combat sequences below so you can get an idea of what really gets my pulse going. 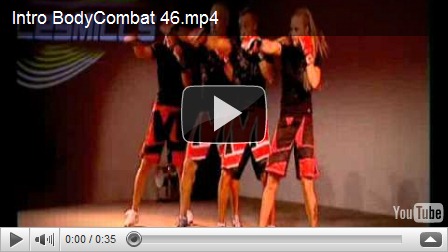 Come back tomorrow for a fun tutorial on Try-It Tuesday!